Welcome To My Web Page 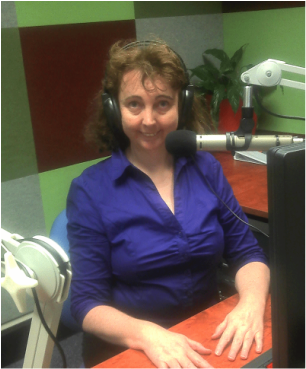 I studied Certificate IV in Screen and Media (Radio Broadcasting) in Semester 2, 2011, to improve my skills and expand on what I've already learnt in the Certificate IV News Media course last semester. I love reading about the British Royal Family - both past and present - and various historical events including the Magna Carta, the Great Fire of London, the Abdication Crisis and the English Civil War. I've also read some French and Russian history.

One of my dreams is to have my historical novel published. I began writing when I was living at Pilliga, after finishing the HSC. Let's face, there's nothing much to do around Pilliga anyway.The novel involved extensive research. I evently moved to Sydney, travelled to the United Kingdom twice, where I visited many historical sites.

The Sydney Institute of TAFE NSW 120 Gala Dinner and Showcase celebrated 120 years, whilst Certificate IV Screen and Media students broadcasted live from Town Hall from 4.00 pm to 9.00 pm.  I was on air with Phillip Charalambous from 4.30 to 5.00 pm, and I also interviewed Education Minister Adrian Piccoli afterwards to ask what TAFE meant to him.

Tune in my new program, Right Royal Roundup, on Sydney TAFE Radio for updates mostly on the royal families in Britain, Denmark and Monaco. How did the Duchess of Cambridge's sister get in shape before the royal wedding? Why is Prince Albert II of Monaco threatening to sue a French publication? Who married recently in Edinburgh’s Canongate Kirk? Why is Wallis Simpson back in the news again? Which royal recently graced a magazine cover?

Photo courtesy Foxtel Publicity, Australia
A recent article is a review of the television series, The Borgias, which premiered on Monday, 29 August 2011, on Foxtel's W channel. It is "must see" TV for anyone who loves great historical dramas, including The Tudors.

Who were the Borgias? They were the infamous family of Cardinal Rodrigo Borgia in Rome. Rodrigo builds an empire through corruption within the Catholic Church. He bribes, buys and muscles his way into the papacy as he is elected Pope Alexander Sixtus. He, his ambitios sons Cesare and Juan, and his daughter Lucrezia, become the most powerful, influential and ruthless family in Rome during the Renaissance.

Alexander VI and Cesare ruthlessly despatch anyone who stands in the ways of their ambition. He arranges marriages for Lucrezia and her younger brother Joffre to cement political alliances.

Machiavelli allegedly based his work, The Prince, on the life of Cesare Borgia. This work introduced the word "Machiavellian" into general usage.

The series opens in 1492 as Pope Innocent VIII was dying - the same year Christopher Columbus discovered the New World.

At Home With Julia

At home with Julia Gillard (Angela Bishop) and Tim Mathieson (Phil Lloyd).
Does Prime Minister Julia Gillard really wear fluffy pink ugg boots when she's at home at The Lodge or Kirribilli House? A controversial new comedy, At Home With Julia, premiered on ABC1 on 7 September 2011, at 9.30 pm, which sends up the Prime Minister's private life with her partner Tim Mathieson.

Producers says the show will ask who walks the dog, who puts the bins out and who sends troops to Afghanistan.

How do they juggle busy working lives with their relationship? Does Julia really cook dinner for her guests at The Lodge? Who knew those three Independents were really fussy eaters? The show also lampoons Wayne Swan, Bill Shorten, Kevin Rudd and Tony Abbott.

The series is written by Angela Bishop, Phil Lloyd and Rick Kalowski, and produced by Quail Television. The show's budget is estimated around $500,000.

At Home With Julia is now available on DVD.